The vertical stabilizer and the rudder of the BD-4 has been changed twice by the designer and the Bede Corp. The first design "improvement" was introduced in 1970 (sheet BD4-5-05). In an attempt to improve the rudder efficiency and directional stability, the vertical stabilizer was enlarged and the rudder extended to the tip of the tail. See the picture from Bede's newsletter Vol. 2, No. 2, 1970. There was a further plan revision made in 1973 (probably adding a trim tab).

To determine whether your BD-4 has the large or the small fin you must measure it. The were some BD-4s built with the small find the rudder over the full length. The full size (later version) vertical tail and rudder is 19.0" at the top and 47.0" at the bottom. It stands 43.12" tall. 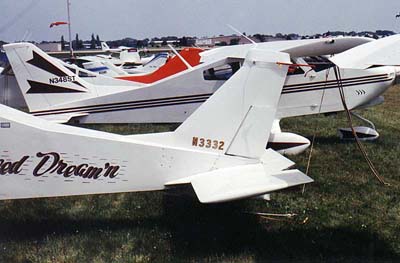 Although this was considered as a "design improvement" there are still BD-4s flying around with the smaller tail and split rudder. There are also pilots who argue this tail is just fine.

The adjacent picture shows the tail of Scott deGuynor's "Speed Dream'n". You can see how the rudder does not go all the way up. Compare it with the tail of N3485T behind Scott's. This one seems to have the modified, longer vertical stabilizer with the full length rudder.

If your BD-4 has the small tail and split rudder and you would like to increase the rudder size, you can do it the way Cecil Hopkins did. He left the fin alone and added a bigger rudder per the sketch.

Here is a picture of Cecil Hopkins plane: 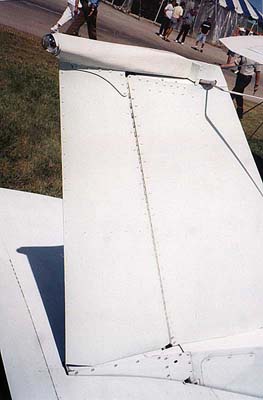