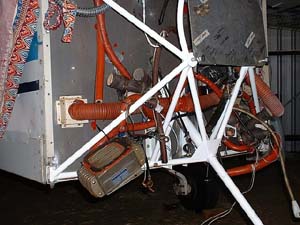 I bought the whole thing from Vans US$660. Just told them I wanted to buy an RV6A nosegear for my BD4. I was surprised it was so reasonably priced and queried the guys at Vans saying I wanted everything that hung off the front of the airplane. The $660 gets you the leg, the wheel with tyre and two tubes, the castor, fiberglass leg fairing, wheel fairing, leg socket, mounting hardware and plans for the nosegear. Good value in my opinion.

We looked at the plans and made some measurements of the BD4 engine mount and I had our local aircraft welder and fellow EAA member (Chapter 1308, Toowoomba), Barry Manktelow, modify the original engine mount to follow the Vans engine mount. The detail geometry is very slightly different to fit the BD4. The modified mount was powder coated. The two AN6 bolts either side of the nosegear require drilling out the original 3/16 holes at the lower outside corners of the BD4 nosegear box. There is some 3/32 4130 plate on the inside tying the 3/8 hole to the 3/16 one above it. 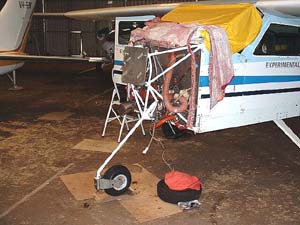 I had a good look at an RV6A that turned up just as we were measuring all this and the BD4 appears to have lots more structure in this area. If building a new BD4 you could probably save a bit of weight here. Be warned, measuring the original BD4 engine mount/firewall to the holes either side of the nosegear box is critical. We were very careful and all turned out very well which may also have been a bit of luck. Our airplane was slightly off the BD4 plans dimensions so I'd measure the airplane and not rely on the BD4 plans. Barry also had a very solid jig for the motor mount and it went back on the airplane quite easily. A side benefit is that we now have a real firewall instead of a firewall with a hole for the BD4 nosegear.