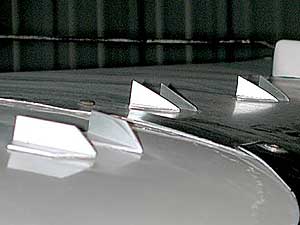 Vortex generators on the main wing.

Please remember this is "experiment"al and I have no crystal ball on what is right or wrong. I can just tell you what I have now. I have done some research. A good friend of mine is an aviation writer and he interviewed the fella that has the VG STC on the Cherokee 140, he gave
me this final location for VG's on the main wing.

I have moved the location of the VG's around a bit and right now they are at 12 and 1/2% of the wing chord or 6" back of the leading edge on the main wing. The material is simple angle aluminum from the home depot store, glued on with clear RTV. On the wing, I put them on in pairs about 2" apart at the front of the VG and 3" apart at the back of the VG, with about 6" between pairs. I know one of the fella's here tacks them on with double sided tape to allow him to move them around easier, to experiment with different locations.

I just take the aluminum and cut out angles of .75" by .75" on my bandsaw, file the edges down to smooth them out , clean everything with alcohol, layout the wing and glue them on. I have tried three different styles, the one on the wing is from VG's I have seen that are STC'd for more turbulence. I call them shape 2 in the attachment. 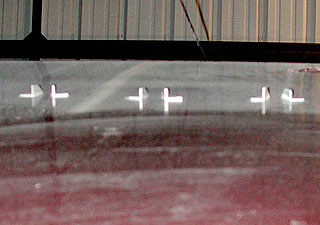 Fuselage at trailing edge of wing

I feel I can still improve the stabilator locations and number of VG's, I have those at about 14% of tail wing chord, or 5" back of the leading edge. They are shape 1 in the attachment. I have moved them around too and have made them a little longer at about 1 and 1/8" .

I also saw a US Air Force study of VG's that stated that slower, boxier aircraft could gain speed ( like the cherokee 140 STC claims) by placing them on the fuselage. So I have a second row ( 6 sets) of them across the top of the fuselage at the trailing edge of the wing. That picture is blurry, sorry. They are shape 3.

I just got back from a 3000 mile trip in the 4. Along the way to California I stopped by and visited with Bob White in Albuquerque who is interested in the VG's and took him for a ride. I had relocated the outer wing VG's and made them larger 3/4" high, but I think I will go back to the 1/2" ones. They are just as effective and less drag. I repositioned them also at 4.5" back of the leading edge, so it's about 10% of the wing chord.


Here are some drawings with measurements: