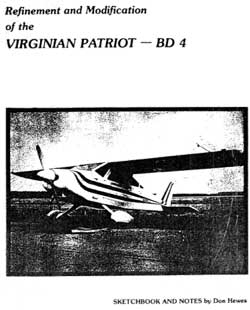 This book was written by Don Hewes. He describes modifications he developed for his BD-4. There are numerous hand drawn sketches and an easy-to-read text. The modifications are very much thought through and are invaluable improvements to the original design.

Don Hewes died a few years ago and the book is no longer in print. You can however, download an Adobe PDF document from a scanned in image of it:

hewes.pdf (6 MB, right-click here and select "Save Target As..." or alike.)
hewes.exe (6 MB, or if you have problems with the upper link use this self-expanding ZIP archive)

Don's plane is now owned and flown by Stan Dauncey in Great Britain. Check out his profile for pictures of the "Virginian Patriot".

Note: When you do the modification to the landing gear box be aware that there have been problems reported, due to the decreased stability of the lid. Search the newsletters for information and fixes.

I have long appreciated the detailed drawings and instructions that Don Hewes provided in this document.  One inconvenience with a scanned document that is then converted to a PDF is that the pages are really just a "picture" of the page.  On the other hand, a PDF document created from a text document can be searched.  I think Don's book would be an even greater asset if it were text rather than scanned images.  That can be done with OCR technology, but in my experience using them, the results are often far from satisfactory, and much work still needs to be done proofing the resulting output.  The second alternative is to simply retype the text.  That is what I have done.  In a couple of weeks of spare time typing, I have created an openoffice document from the PDF.  The actual drawings are images, and have been modified slightly.  The title and page numbers were removed, Don's signature was moved in most cases, and some minor clean-up work was done. In a couple of instances, some of the text was removed and typed in below the drawing.  The result was converted into a PDF which is now searchable.

I chose the Courier font as it is most like the original typewriter font.  Headings were done in larger bolded type and a different font rather than using all caps.  I have added a couple of editorial comments, which are clearly identified.  I ran the spellchecker, and changed anything that was highlighted except some compound words (like taildragger) that my spell checker didn't like, and proper nouns.  Blank pages that were not numbered in the original are now numbered so page numbers will be different.  If the PDF is printed two sided, the drawing description and drawing will be next to each other with the book laying open.  Otherwise, I have tried to keep everything as original as possible.

If anyone notices any errors in the text, please email them to me at:
bob (at) bob-white (dot) com and I will update the PDF.  Downlaod the new PDF here:
The new Virginain Patriot
Latest update: December 18, 2008