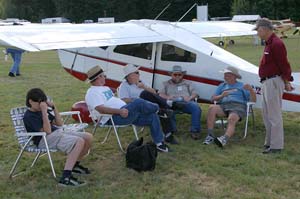 From left to right: Tassilo (my son), Steve Criders, Gordon Seykora, Jim Huber, Gord Hudson, ??. Gord: I did you the favor and blacked out your undies. Oh no - now everybody is looking at you :)

When we came on Saturday around noon the weather was gorgeous, but we were told it has been quite wet from Wednesday until Friday. So who came this year? I hope I get this right now: Gordon Hudson came with his RV, for almost the entire fly-in. Steve Mahoney is still working on his cowling and was given a ride on a friend's C-172. He staid until Friday and I am sorry to have missed him. Dave Anderson flew in with his BD and had also returned before we showed up. Steve Craigle lives in Arlington and was pretty busy flying Young Eagles every day. Fred Hinsch and Eric Munzer flew in from Canada with their BDs on Saturday for one day. I'm pretty sure Louis Bigelow and his wife scored the the longest road trip to get to the fly-in on Saturday. He kept us up-to-date from the road with emails to the mailing list. It is too bad we couldn't find him on the field before we headed for the steak house on Saturday night, I was curious what a Sasquatch orders for dinner. Peter Miles was there, too on Wednesday, so unfortunately I missed him. Craig Evans came in with the big iron from S. Cal. I was looking forward to his contagious enthusiasm; needed another fill-up to get through the year until next year's fly-in. He got a hold of two or three potential builders and did not let them go until we were pretty sure we had them in our bag. Craig: I did receive a request for the CD from Paul Wilkes in Chehalis, WA, so I think we're on the right track with the missionary program :). Oh - and of course there was Jim Huber, the host of the patch of lawn we gathered again this year. With him Steve Crider, his neighbor at Crest Airpark. Steve bought Dave Dotson's airplane, neighbor of Roger Mellema, and is working on it actively. Also from WA there was Charlie Bernert for a short while with us on Saturday. Charlie had bought Roger Mellema's plane. We told about all the gadgets on this plane and that he had to repair some hangar rush on the tail. He thinks to be finished rather soon. Gordon Seykora came in from Nanaimo B.C., CA. He and his son had recently bought Allen Sandstrom's C-FORD. Interestingly his son is a King Air pilot and says the BD-4 is "the easiest aircraft to land of all the many aircraft he has flown" (says Gordon). 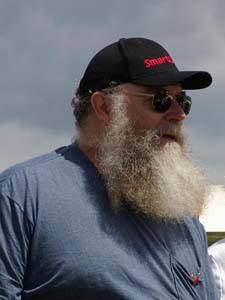 The highlight this year must have been Jim Huber's PowerPoint presentation from his trip to Sun 'N' Fun, FL. That was before we came, but I hope I'll receive it from him to put it on the website here. On Saturday we gathered at the runway theatre and saw John Moore's 2004 "Flight of the Phoenix", a remake of the 1965 original with James Steward. Nice special effects but in my opinion an otherwise bottomless shallow production, in contrary to the original. But it was free and had airplanes, so of course we couldn't miss it. Oh - most interesting was a bright object crossing the sky right above us. It looked like a satellite, but we agreed it was too bright for that and must have been the international space station. That was better than the whole movie.

There were now two BDs with vortex generators, and both owners swear by it: Fred Hinsch (has had them on for a while) and Steve Craigle. Together with Richard Martin there are three that I know that have had very good success with them. Gord Hudson bought a set of clear plastic VGs last year from the representative of a WA company (forgot the name) that produces it. They looked really nice and cost around $100/set. The representative tried to sell a set to Steve. A futile effort: of course Steve cuts and pounds them himself for a few bucks. I think the BD-4 crowd is just a difficult market, we're all vigorous scroungers. Oh - and we were quick to tell him not to offer them to Jim Huber either: Jim will not let anything near his meticulous wing surfaces (see below).

I missed Steve Nemeth and Lary Seibold. I know Steve is building actively, he probably was at the show.

Thankfully, I didn't hear about any accidents this year on the show.


It was a lot of fun this year. Thank you Steve for your hospitality, a great flight, and the always interesting stories! See you all next year at AWO!


*) Alright, I was just kidding: the "tower" seemed to have forgotten about us for a while and then cleared us for a long landing, when there was lots of altitude to burn off in a heartily slip. The landing was silk smooth.